Yups. Mine topic for this post is OCH aka Old Changi Hospital[for some people who dunno the short form of it]. Due to my boredom, i went to search for the HISTORY of OCH. It has a 70years plus history le. So yups.. I finally know why and what happened in OCH. AND AND the most most interesting thing i found out is that.. OhWell, you will know when you see the map[ONLY for those who went for BIANTAI'S CHALET/those who stayed at the Chalet before]. And i decided to blog out the histories of it. =D And i didn't know that there was a OCH A&E. Cheers. If you're those timid ones/scared of ghost, better dun read.

With its classical design, one can see that OCH is a typical replica of buildings built by British Colonial architects in the early 20's. Surprisingly OCH was not meant to be a hospital when it was first built (same for the A/E). The British was planning to have a heavily guarded military location in the east of Singapore. The site was strategically selected for it is high on top of a hill overlooking the sea surrounding most of the east side and the south side of the island. For about 10 years before the war, this classical 7-storey high building compound was used as military command quarters and barracks.

During the assault of the Japanese aggression from Malaya in February 1942, Changi was targeted as one of the first attack points. In a day or two, it was occupied by the Japanese army moving from Puala Ubin. Soon after that OCH was converted to a military hospital where all the wounded soldiers and civilians were attended to. After the Japanese Occupation ended, it was converted back to its original self, as a public hospital and later with a Military ward on the third level.

From February 1997 onwards, OCH was closed for its hospital operations were replaced by the new Changi General Hospital. It got isolated and left vacant there since then. According to some insider sources, the abandoned OCH will remain as it is but it will be re-open for the 'public' soon during 2005 for the Army Camp or for the Officer Cadet School (OCS) Trainees.

However, stories about the building being haunted started in the early 40's. The Hospital itself had 70+ years of rich history when it survived from the dreadful World War II that took place from 1942 to 1945, witnessing the fall of Singapore and the brutal tortures towards the prisoners of war (POW) that happened there. Therefore, seeing spirits of all races and of different nationals wandering around in the compound would be a common sight.

For it has been abandoned for several years and initially was quite loosely guarded, OCH has become a wonderland for many adventurers. It is such a famous 'must see' landmark for Changi Chalet goers at night when they get tired of TV and chit-chats. There was a joke saying that on Saturday evening as soon as sunset, there would be more people queuing up to go into OCH than to Golden Village Cinema!

However, some "talented" rumbles have vandalized the interior by smashing the windows, cracking the walls, burning trashes, and painting Graffiti all over the wall. To exploit this antique building further, some even performed Satanic cults on the top level room! As a result, this has forced the government put on more security guards at the front and back entrances, more policemen and dogs[I hate the barkings!] on patrols... There were police reports that people went missing at OCH.

Inside the OCH compound, you can see many wards with high ceilings. Notice that the wards and rooms are never closed up. This design makes air ventilation easier for the wards didn't have any air-cond but ceiling fans! Now those wards are totally left empty except some fixtures such as fans, wall-mounted switches, basins and some built-up platforms on the floor. Many patients who could not make it had their last breath right there...

Perhaps this is the 2nd most scariest place in OCH after the mortuary. Out of so many wards and rooms, we found one that is remarkably different. Even for today it has a kind of emergency red-and-white plastic tape barring it off from access. It didn't seems to safe guard people from any physical danger inside the room, but may be from something else...

This particular room (rather we call it a chamber) unlike the others with open wall ends on top is completely self-contained. The walls are made of thick solid concrete and unpainted. Further inside you will see some concrete built-up structure as if it was used for securing something tight on the floor. One of the horrible signs is the metal chains with one end set loose and the other end securely fixed on the wall. It seemed strong enough to tie up a tiger.

And, you can see maroon colored blood stains are still left on the floor. One would expect to see such a chamber in a prison but never in a hospital! But don't forget, this is a military hospital used by the Japanese. Maybe the POWs were detained at OCH. And they were believed to be tortured to death over here.

Have you heard before there's underground bunker in OCH? There is! But we can't go in there as all the entrance had been sealed up. 1st entrance is by the lift. Second and Third sealed up mound by simply dumping plenty of concrete at the ground floor staircase, and the exit door at the other end of the building got tightly nailed shut respectively.

Right on the top of the building there is a small open look-out space. From there we found a chimney which we suspected is connected to the underground bunker. People who were in underground did need some air vent for breathing. Ok, true enough, this was what supported our believed. However, like a long tunnel, the chimney was so narrow that can barely allow one person climbing in and out.

They even used some special equipment to drop their camera deep down to the tunnel and captured some photos for 20 meters or so! They found some bats hanging down the tunnel and they dropped off the idea as it is a long way down. 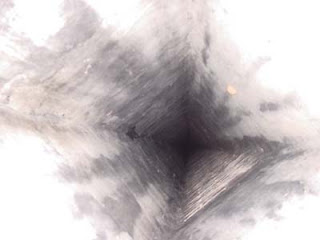 The Mortuary is not located in the main buildings but in a small timber house at the most west side of the OCH territory. There is a small road that connects to it from behind the hill. And there is Security guard guarding there. So yups.. 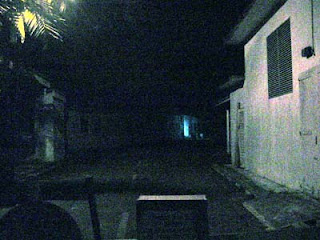 The white quarter on the left is the mortuary. The green light that looks like ghost light is actually the light from the guard house. It certainly takes a bravo to night guard this eerie place. 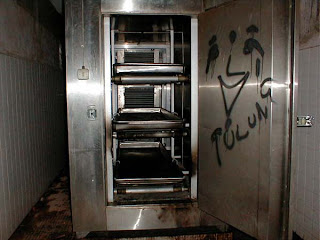 The Fridge use to store up maximum 3 corspe.

SOme photos in OCH. 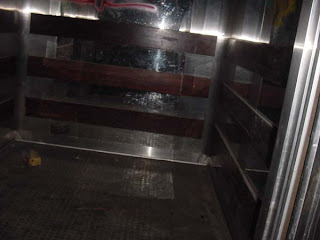 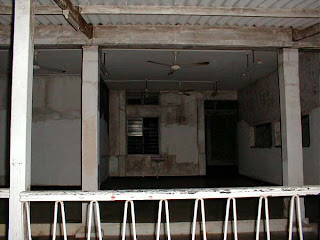 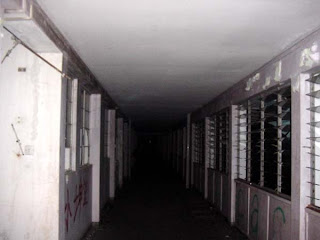 The long and dark corridor. 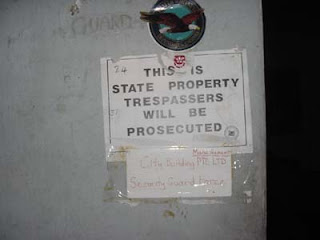 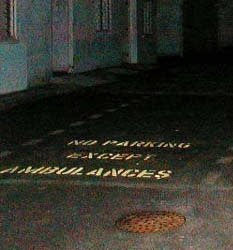 So sad. It does not exist anymore as it was being teared down. This was a three level building, about half the size of the OCH compound. It has a lobby for registration, clinics for emergency rescues, and a basement! The upper levels were basically wards of sick beds and offices.

There were this 3 SPI, if you guys dunno it is Singapore Paranormal Investigators, who went in A&E waiting area. 1 got his ears covered with earphones that connected to the eavesdropping device - one that has a satellite dish in front for capturing the tiniest sounds. He heard something but couldn't see anything from a poster.

That's what he said; 'You wouldn't believe it. As soon as I stepped into the A&E lobby it was like entering a totally different dimension. The smell changed, the feeling.. that was very hard to describe.. just changed. I felt that time was changed and the whole atmosphere just changed. That made me even forgot who I am, where I am, what am I doing and where you guys are! What sounded around me was very realistic voices, sounds and noises of how patients were unloaded from ambulances, put on trolleys and rushed to the rescue ward. I can tell you none of the so-called best stereo surround sound system in my house gave me so realistic the sound quality. I heard big chaos. People were talking, shouting in a mix of tunes and volumes. I heard there were engines operating at the back of the building too which I had totally no idea what that was.'

'I know you guys won't believe me. But I can tell you, even the slightest sound like how a mother sitting on a waiting bench whispering to her child I can hear.'

He nearly dashed across the road and cars were traveling fast in Netheravon Road. Fortunately, his buddies stopped him at the roadside. And they called off after that. 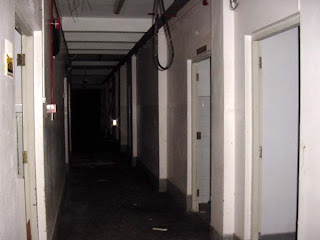 The long corridor after the Kitchen. 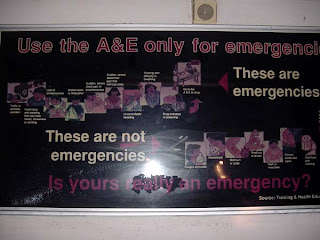 This is the poster. 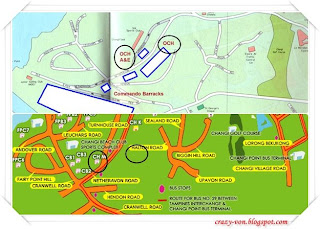 [click to enlarge it if you can't see clearly.]

This is what i found most interesting. But im not sure isit the exact place as it is given in the map. OCH A&E is located at Chalet M??! Is it true? =x