but i still need to put something interesting happened..

Firsty, my piglet's nose is kanna damaged by Christina. She damn joker that day.. Then everyone followed.. Especially HanLin, keep wanting to poke it.
Even my kor did that once to it. aiyohh... poor piglet~ 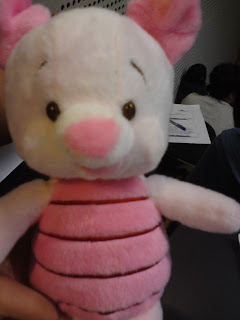 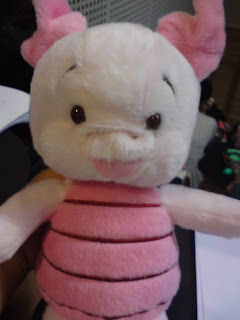 
Next, yesterday was an interesting day of the week. Super L-O-L!!

Morning around 10plus.. A sound like something come into our house.. My kor was sitting on the sofa and heard it and shouted[i wanted to use scream.]: " Whats that?"

Just then i looked at the direction[the moment i heard the noise.], i saw something dropped in. My kor said its a bat. And i agreed tooo.

So the bat was on the floor like a few minutes before it took its flight to scare us. Both of us like running like hell cause it looks big when it fly..
It then hook its wing? on the curtain. See the picture.. Doesn't it look like frog?? LOL. And i can say that THE FACE DAMN DAMN SUPER UGLYY!!!!

My mum then went out. So, my kor went into his room and me went into my mum's room to watch tv and do homework[with the door closed]. My phone rang!!~ And its near the bat area there. I was like Ohmytian, who call me??! I was praying that he/she would call my house no. Chey~ it was my mum.

I took my braveness and went to take my phone. I remember got 1 scene i think the bat is going to make his move. I quickly ran to the kitchen and hide. LOL! He only move one of his leg/wing? I was laughing at myself on the spot. =.=

Anyway, my mum and dad came back. And Dad is di siao-ing the bat by throwing things to the curtain. But the bat didn't move lor. My another kor wake up and asked to call the what service to get rid of it. Still need money de lah. So i think we all give up on that idea.

Thanks to my father. He get rid of it by fighting. LOL. The scene is damn funny.. The bat keep flying across the living room. My dad was like: " ta you fei qu na li."[The bat flys back again.]

My house like having war lah. And finally i heard the victory. =D But then, my father prank me by saying the bat stuck in the curtain. =.=!! And i actually believed him. Whatever.. 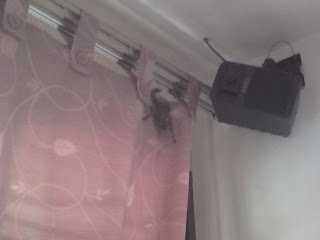 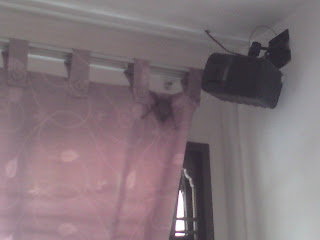