Yooziie! And im gonna blog after so many days. And i will make a hush hush post. Actually i did type almost half of the contexts im going to post but my com hang and taddaa… My post gone~ =[

Anyway, i went to meet Wilburn and Alvin at HarborFont MRT with AhPong on friday after having my lunch with Vanessa, ChingYan, Sharon and Enni. Afterall, everyone is late and both of us is the earliest cause we took cab there from TP. The feeling when meeting them isn’t the feeling i expected. Kinda surprise.

Yupyups. We wandered around Vivo and somehow we walked towards Cinema without planning the route. So, we went to buy tickets. Wanted to watch ‘I love you man’ but then the both of them have not reach 16 yet! So, we bought ‘Land of the Lost’ instead. While waiting for Henry to come, we went Carsle’s Junior. Alvin decided to bring the burger into the cinema to eat while Wilburn bring in fries.

Met Henry and off to the cinema. Sat in between AhPong and Wilburn. Something sweet that i never expected and never ever had in cinema before. Thanks. Guess im too noisy to be in cinema. But it cannot be blame. The show is so hilarious. Chaka! LOL. I like the action the monkey did. LOL! Just kidding.

Off to meet Milissa after movie ended. Then to TimeZone to play. Watched them played. Very funny~

Too bad i cant join them for dinner cause need to celebrate my dad’s birthday. By the way, Happy Belated dad! =] Bought a cake for him and sung the ending part for him! LOL. Can’t blame, we always did that. hahaha!

And I REGRET NOT TAKING PHOTOS WITH THEM! =[[ 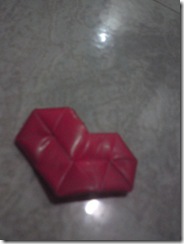 =] 1st heartmade given by a guy. Thanks! =] Dun anyhow think. hahas. Cause im the only girl there.

Today went out with parents to collect Passports and they are late back from market. I hate my parents like that. ROAR. But we still went in the end. The waiting is fast. =] Then off to dunno where to eat my brunch. Saw the St. John student from Jyss at the market there.

Went TM and T1 to walk and off to interchange. Mum went to buy Bak Gua. And there’s a lucky draw when you spent 5dollars and you get to spin a wheel. So, im the one who spinned the wheel. My dad was there shouting Coffee Voucher. Cause it only cost 50cents per cup. And his wish came true. 3 Coffee and 1 Soft Drink Voucher. He damn cute lah. =]

And we went to drink. Then i take a quick nap there. =X And home sweet home. 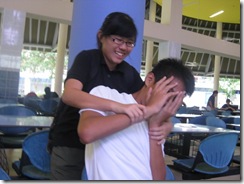 See how fierce is Sharon! 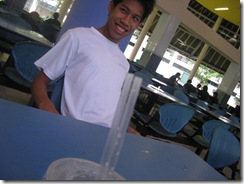 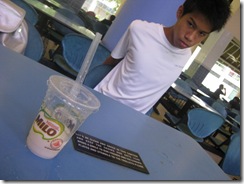 LeongWei didn’t know that i was taking him but he thinks im taking the Milo. hahaha! 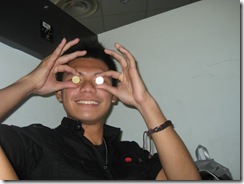 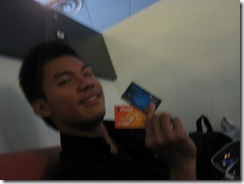 hahaha! the below pictures is actually taken for boredom. But somehow it turn out into a story by Vanessa. hahahas. But im not sure the sequence is in order anot. So this is how it goes… 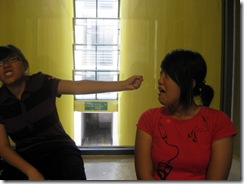 Evon did not know what she did to Sharon that she wanted to bash her. 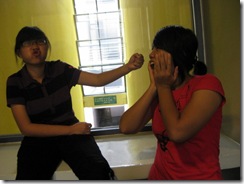 Sharon then laughed at Evon because she did bash her. 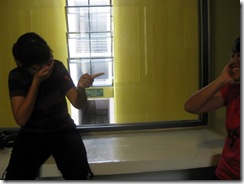 And Sharon has the victory. See Evon’s face! 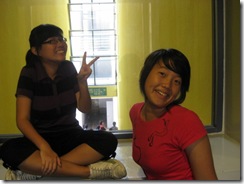 Then Evon plead Sharon for forgiveness. 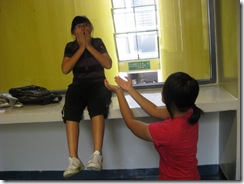 And being taken by ‘Gou zai dui’. 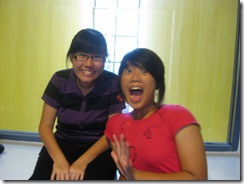 Evon was thinking whether should take together with Sharon anot. 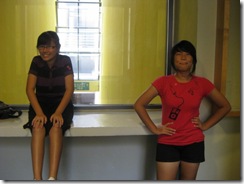 And She agreed to take unwillingly. =X 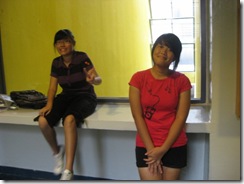 And yeah! no lah. This is not part of the story. hahhas. 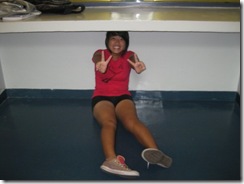 Will upload the rest of the photos when im done photoscaping it! =D