How sweet is the God. I woke up from a nap while taking bus 27 from airport to home. The moment my eyes are open, the first thing i saw is a rainbow. =D

Went airport for project meeting. Oh well, cant really say is a meeting. Just a meet-up i guess. And seriously i hate culture! I just cant find anything about it lah. =[ Maybe im too stupid already. Hais…

like what i say ‘culture make me crazy!’ I just cant understand~ and im stuck with what they told me.

I had 2 BAD dreams. I cant considered another one as BAD i think cause i told En Ni and ChingYan and they actually laughed! I don’t know why. That’s the 2nd dream i dreamt. As friday [20 Nov 09], im going out with En Ni to flyer then to eat dinner with Vanessa and ChingYan also. Then i dreamt the plan of the day has changed. Totally changed! First i dreamt the five of us (En Ni, Sharon, Vanessa, ChingYan and me) went to Vivo City. They excluding En Ni and me went to Sentosa for don’t know what lah. Then i asked EnNi; “Sentosa can go Flyer meh?” She replied; “Ya, can! lets go buy ticket.

Was at the machine there. EnNi suddenly changed to WeiLing sia! I don’t know why. The machine changed to neoprint that kind. We both like playing with it. And when the photo is printed, WeiLing is gone! She then msged me; “hey, i go first. I’ve printed a picture of you and me. You take it okay? and the rest pass it to me.”

Then suddenly the scene changed to Downtown. My CDS classmates pop out. LOL! [quite surprising] They asked me where im going. And realised i didn’t bring out my camera for the flyer trip. Wanted to cycled back home to take but was lazy and i thought i cant make it on time. And i really really scared that i cannot meet them. But i think i woke up already.

The first dream is real bad! I dreamt someone is dead. =[ That someone is once a closed friend. I don’t want to lose him. =[ And the first thing i thought is… i won’t be able to see him online. The scene is like the whole batch of us crying in front of his coffin. And i was wondering can i really say it here?? it’s the first time.

Ohwell! Next… Today is a happy day. LilyLim. LOL! She’s a weirdo! I think the whole class cannot tolerant her la! Her nonsense!

i don't want to lose anyone. =[
is there a possible way?
im getting tired.

Having CCN on friday, the thirteen. Its a bad day for me. =[ Firstly, i dropped my phone. Actually drop the phone is alright for me, but i lost the pen thingy and my touch screen cannot work after that. I cried:( Secondly, hard to sell coconut. =[ and something happen later on. It a sequence of bad things come out. Didn’t have the mood after my phone dropped.

Had a long day.

Saturday. Went out for project. Nice:) I like the view!

Sunday. Went out with WeiLing to service my phone at simei. Walked at pet safari, i like Japanese spilt[wrong spelling i think?] And i dun like to service my phone cause warranty just over 2months only. I WANT AINO! Need to pay 120dollars just for the screen sia! =[ Its the 2nd time. And in return, i accompany her to eat Chicken Rice and hunt for her Lime Leaf. And she found it at the ColdStorage! =D went homed after that! Then went out to help my kor to pass something to her friend. lmao!

Then you know what?! I ate prawn in the middle of the night because of my kor. Recently, he keep prawn-ing. So he suggested want to eat when he come back[it was like 2plus?]. Still alive la! I got frightened when the prawn is jumping! *phew* im still alive. hahaha! Kor did the cooking and i did the washing. lol!

Monday. Guess we had addicted to Old Maid and poker! LOL LOL! okay. tomorrow going help out in TPrawks and need to get to school at 8.30am! Yet im still here awake. =X My eyebag getting woah~

FYI; my phone is ready for collection! So fast~

FYI; I SAW ELVIN NG AND OU XUAN! And i think i saw Dai Yang Tian also! =D At my house there de coffeeshop! Cool right!? I was eating halfway when i actually saw Elvin first. And i turn and ask my mum; 'mi, is he the mediacorp one? the shuai shuai one!' My mum say; ' ehh... ya lor! is him!' I was damn high liao! Because he damn shuai la! I manage to take his side and backview only. =[ 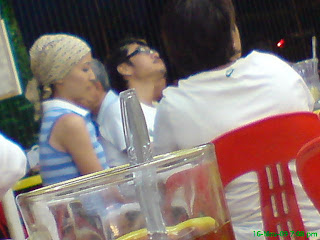 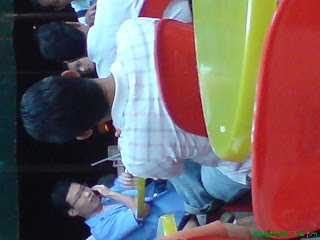 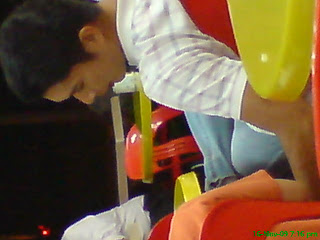 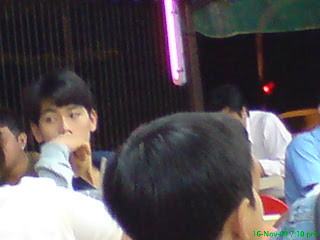 Did i say i wanted to have this Polariod Camera before?! I wanted it a long long time ago when i first watched MVP Valentine. The male lead uses this type to take the photograph of this cat and deliever it to the female lead every morning after they broke up. So sad la! =[ 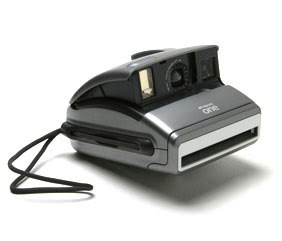 This is the old type de i think but not the oldest. 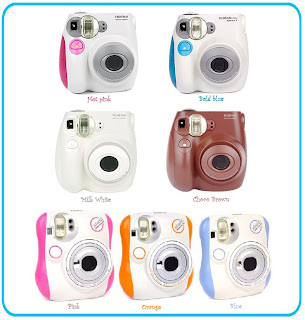 This is much newer i guess? And there's another one look likes normal camera too! How do i know got this camera? Firstly, is because of Christina. Next is my kor's chalet that day. He lent from his friend. Like so coincidence can.
I want one! =D Anyone want buy for me?

Next is the big big camera. Much more professional type de. I also wanted this too but because last time i thought too big not good to carry around. but now i guess got much more smaller one. I also want one! =D 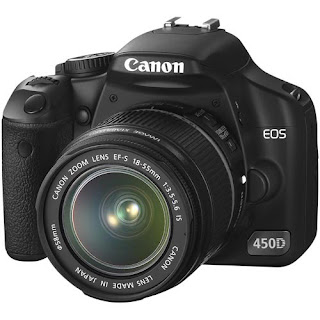 JianHong got this! and the resolution is like so awesome can! =D love lovess!

Ohman! Im going to broke soon. I need to work and save money! Need to buy alot of things like ...
1. Polariod Camera.
2. the Professional Camera
3. Lappy case
4. Ipod touch for my kor
5. Piggy bank. But not pig! I want is the milk bottle de. Small one. Anyone has?

I think still got. But forget le. =D hehe.

FYI; FDM is addicted to poker cards!
FYI; I wanted to donate blood! The feeling is like so great i guess? Can help people.

And last but not least, Happy Birthday kor! =D 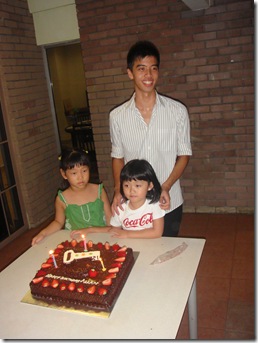 Attend his 21st b`day celebration on Saturday,7Nov09. But i stayed there for 3days and 2 night. =D

Went over to the chalet on Friday midnight and woah, my dakorkor actually misplace his car key inside the boot. LOL! Called the locksmith to come. Super gong la him.

Anyway, reach there and choose the room. =D And tadaa, i slept liao. =X

Morning went back to TP to help out in the D’s cup Badminton:) Fun and so sorry. Keep saying the wrong thing. Arghhhh. Thanks for the help for who helped me! Ended at around 1plus and went back to clubroom to do the model making thingy. =] Did until 4 plus and had our late lunch. Ohwell, i forget what we ate. OH! MEESUA and the Chicken! =D I like it. And then i went back to downtown Wanted to exchange the mini speaker with the linkpoints but then due to some technical problem so did manage to exchange. Was thinking should i? Cause the speaker still need charge de. Weird leh. Should i?

Went to buy charcoal and waited for my kor to fetch me to the chalet. OHohoh! Waited for him like almost 2hrs. Reached the chalet was like WOAH! So many cars~ And this particular car pissed us off. Arghhhh! SHoooo la! This is the first time i see jam till like that. So many people celebrate bday ah. Rot until my cousins came. =]

Sang birthday song and ya, you know. Birthday treats. I’ll show you. =D And some idiotic person ruin the whole mood there la! Not to mention the name and i can say its not your birthday you care for what! WTH la~ Ohwell… Shoo~ 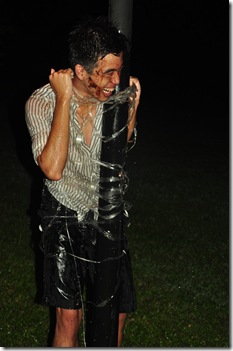 Did some cleaning after most of the people are gone. Im a good girl. =D Slept at around 2plus. ttired~

Did i say? Yesterday, I actually scratched my finger to save a bubble tea! How stupid am i. And i had to bath my hair using 1 hand. But at least i can drink the bubble tea – Oreo Chocolate + Oreo:) 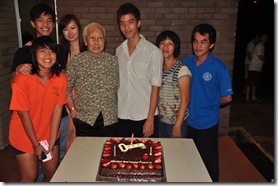 Today had HCDE lab work 1. Cool uhs, at first i dunno what to do lah. But soon everything went smooth. Din manage to finish it. The chair!! Think i have phobia drawing it le. =[ Still, I prefer acads.

After class, went to T1 accompany Enni as she went for work. So, sharon and me bought the icecream. Cookies and Cream for her and Spotty dog for me. Awesome:) Ohya! And it was raining heavily when we reached CP. And i wore my this stupid slippers, no friction one. I walked super slow and carefully while they all run down the slope. Vanessa say im like dancing Indian’s dance. LOL!

Then we was walking along the corridor, i accidently SLIPPED and tadaaa. I FELL! Ya! You din see wrong. I FELL DOWN!! And the first reaction when you going to fall down is to grab something mah. Then Vanessa was in front of me so the first instinct is grabbing her bag, but it seems like i cant reach it. =X! So ya~

Had her birthday advance celebration on Friday. Kinda so called a surprise party for her. =]] Successfully bah although she saw us. A lappy case was bought to her by us. Hope she can use it and love it!:) Black Forest Cake too!

For more information, you can take a look at Shermeen’s or Prisdear’s. =D

Im pissed off by a bus driver. Omg lor i tell you. Saturday night was raining so heavy with the lighting and thunder i guess? I went out with my mum, so was going to take 72 back home from interchange. We JUST missed the bus and waited at the queue there. Then this bus parked in FRONT of us. In front leh! The rain like splashing directly on us can!! thanks to his bus. like wth. In the shelter also kanna drenched! =.= Because of this stupid driver!

Anyway, went out to swim with HuiJi while MinNing went for a run. PS: prispris, when can we swim together? hahas. After swimming, went to mac and eat. And wait for WeiLing to come. Off to Ehub while Min Ning went home to do homework. JiaYou! Helped my kor to print photos for his 21st bday. =] I’m so good!

Oh! took bus with WeiLing and HuiJi took MRT back. WeiLing and me regretted sitting down. Cause of the smell. =X Then we changed place. LOL! yah yah.

School tml. sian! =X And im like so slack now. Someone motivate me please~ =[